Before diving into more details about why Blue Lake is focusing on early-stage opportunities in Ukraine, it is worth asking a broader question. Should VC firms be concerned with lesser-known markets or concentrate their efforts on the well-established tech hubs like London, Berlin, Silicon Valley, or others?

Many, if not most, VC funds feel comfortable being embedded in one of these well-established tech ecosystems. Some follow the thesis that if a start-up is good enough, it will find its way to them. This approach seems to be valid for the later staged investments where even the ‘stealth’ start-ups are well known to the insiders, but what about early-stage start-ups?

Blue Lake has embraced the thesis of expanding the deal sourcing horizon into emerging economies. We all know of brilliant immigrant founder stories. What about their countries of origin? Could certain regions provide high quality yet relatively unexplored deal flow to VC firms willing to put in the effort?

We believe this to be a highly promising approach and at Blue Lake focus is on early-stage start-ups from Ukraine. The country has one of the largest numbers of highly qualified programmers in the World. Atomico ranks Ukraine amongst the top 10 countries in Europe, with the number of professional developers at almost 200,000. European banks, fintech firms, video game developers, dating apps, online betting and many others rely on their R&D and development in Ukraine. 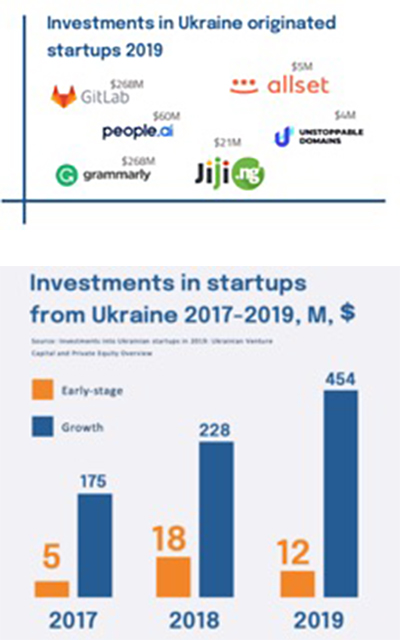 Over the past five years, the critical mass of these professionals has reached a tipping point, with Ukraine becoming a hotbed of new ideas and start-ups. We estimate there are around 3,000 active startups, and of course, there is now a track record of winners, including Grammarly, GitLab, and PeopleAi to name a few.

While it is hard to pinpoint particular areas of focus in this still-developing ecosystem, we would highlight AI, VR, Gaming, Education, HR, FinTech and Security as being particularly promising. Founders tend to be mature and experienced with strong technical backgrounds. The limitations come primarily due to founders’ lack of international experience and network, but there has been significant progress on both fronts in the past few years.

Taking into account these positive trends, let us take a look at Ukraine’s VC investment scene. We see a rather interesting picture. The available data highlights an incredible disparity between the later- and early-stage investments in Ukrainian origin start-ups, with over 90% of funds going towards later rounds.

Locally-based VC funds are few and far between. Combined data from the DealBook, TechUkraine, CrunchBase and our own research point to around 10 active investment companies with varying activity levels. Alongside this, there are a growing number of individual angels, however they tend to invest by themselves, rarely coming together in a syndicate. Few (if any) local accelerators provide early-stage funding. A notable standout is the state-run Ukrainian Startup Fund (USF), with an ongoing grant program of $25K and $50K for Pre-Seed and Seed start-ups.

Internationally, Ukrainian start-ups are prized by top-tier investors, with YCombinator, Andreessen Horowitz, Goldman Sachs, and Snapchat all investing in Ukrainian origin start-ups. Predominantly, investors come in at later rounds and do not engage with Ukraine’s early-stage tech scene. This creates an unusual dynamic within Ukraine’s tech ecosystem. Vibrant and growing with a unicorn producing track record, the ecosystem seems to have a significant gap in its early-stage investment space. The conclusion that we draw is that the rapid growth in numbers of start-ups, quality and resilience of the founders is overcoming the lack of early-stage funding.

Does it mean that an early-stage VC can simply parachute into a developing market such as Ukraine to gain an uncontested deal flow? Not quite. It took us over 2 years and a local presence in Kyiv to build the necessary ties, experience and understanding to create the bridge between Ukraine and the UK ecosystems. The work has certainly paid off in the shape of a high-quality deal flow, and we are looking to continue building the bridges between the emerging and established ecosystem.

Blue Lake is a UK based venture capital company with a focus on finding and helping unlock value in the undiscovered, high-potential, startups from Ukraine and other CEE countries. For more information visit www.bluelakeaccelerator.com